The Excellence in Detector and Instrumentation Technologies (EDIT) symposium is for graduate students or first year postdocs to get hands-on experience with detector technology.

The detector R&D group is seeking proposals for new initiatives in detector R&D. While all R&D ideas will be considered, priorities will be given for ideas aligned with the strategic directions of the group in Pico Second Timing and Noble Element Based detectors, including light and charge collection, as well as novel Blue Sky R&D directions.

The magnitude of this seeding support is on the order of $50k including overhead. It is meant to give an opportunity to test initial ideas before applying for larger supports like the LDRD.

Applications are made in a form of a one page proposal to the Detector Advisory Group by March 17th, 2022 in an email to petra@fnal.gov. It should include the scientific motivation, R&D goals and plans to be achieved in a year. Please include a list of required M&S items with associated costs and a list of technical/engineering personnel and the hours requested (scientists’ time cannot be supported). Eligible PIs have to be Fermilab employees, but co-PIs from other institutions are encouraged.

After the submission deadline, the advisory group will form a short list of applicants who will be requested to give a short presentation to discuss the details of the proposal. The final recipients of the support will be selected shortly afterwards and work can start immediately. 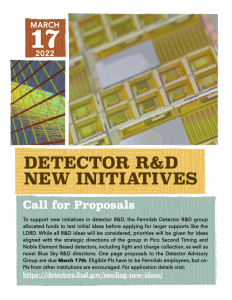 MAS-CCD for the next generation of astronomical instruments
The Multi-Amplifier Sensing CCD (or MAS-CCD) has multiple readout stages placed in the same charge-pipeline that are able to serially and independently sample the same charge packages in a non-destructive way. Each of these readout stages has a Skipper-like sens-node structure with the capability of moving forward the charge package instead of being dumped after readout. This architecture allows to reduce the readout time by adding more readout stages, has the potential to be more resilient to failures and may allow the implementation of new noise-suppression techniques. The MAS-CCD has been already identified as a candidate sensor technology for the next generation of ground based astronomical instruments for large surveys thanks to its ability to reduce the readout noise through the non-destructive readout and, at the same time, overcome the limitation of the slow readout speed of the Skipper-CCD. 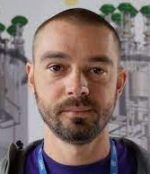 Liquid argon calorimeter with metal electrodes serving as a target for detection of long-lived particles produced and trapped at the LHC
A two-stage strategy is proposed to search with unique sensitivity for exotic long-lived particles that can be produced at LHC, become trapped in detector material, and decay later. The experiment relies on an array of metal rods combined to form a high-density target in one of the experimental caverns. After exposure to radiation from the proton-proton collisions, the rods are individually immersed in a liquid argon volume in a different hall and instrumented as calorimeter electrodes, where out-of-tme decays could produce a detectable signal. The main goal of the proposed R&D project is a small-scale demonstrator setup for serving as a proof-of-principle of the proposed particle detection strategy.

Optimizing the DUNE HPgTPC design
The primary figure of merit that can be used towards the optimization of the DUNE HPgTPC design is the amplitude of the induced charge that can get collected, something that is referred to as the gas gain. The so-called “gas gain” of gaseous detectors is inversely related with the pressure at which the detector is operated. Gas gain is one of the R&D areas my project will pursue: to design and operate a small TPC at high pressure (up to 10 atmospheres), where one challenge is being able to achieve a high gain compared with the intrinsic electronics noise, which speaks directly into how well the HPgTPC would be able to reconstruct the low-energy particles exiting a neutrino-nucleus interaction. I will pursue tests of an alternate design: a GEM-based TPC. 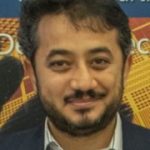 Iris-Connected Multi Cavity Array for High Frequency Haloscope Detectors
Haloscopes axion detectors with RF cavities have the advantage of signal enhancement by forming standing waves at the cavity’s resonant frequencies that will interact with the axions in the presence of the magnetic field through the inverse Primakoff effect. To scan at larger mass ranges the cavity physical dimension will scale down with frequency necessitating the use of multiple cavities in order to maintain the detection volume which in turn controls the sensitivity and the scan rate of the haloscope detector. Coming from the particle accelerator world, where multicell cavities are routinely used and employed in particle accelerators, I thought about using a similar concept for axion haloscope detectors. In this project I propose to use the same concept for axion haloscopes, building a 4 cavity array, where the four cavities will be connected together with irises. We basically end up with a structure that has modes residing in the four cavities collectively resolving the technical challenge of coherent signal combination.

This is a proposal for a new detector for a popular medium:  liquid argon (LAr).  The detector would attempt to directly image LAr scintillation light by using a VUV (vacuum ultra-violet) image intensifier. In traditional LArTPCs (liquid argon time-projection chambers), there are typically 10s to ~100 light collection channels giving information on how much light was collected in a given region of a detector.  With a VUV image intensifier, there would be thousands of channels (mega-pixels even) producing an image of the interaction. The motivation is basic R&D:  understanding if one can directly image the scintillation light from argon ionization.  If it is possible, one could use it to literally look at interactions from particles in new way and compare to LArTPCs, and it could be used to identify electrostatic weaknesses in current LArTPC designs.

Introduction of a Free Proton Target in Liquid Argon Detectors through Methane+Xe Dopant Mixtures. We are proposing to determine the feasibility of measuring scintillation light in a methane+Xe doped liquid argon system at the 1% methane level. This will be achieved by comparing scintillation light collection from pure argon, a methane-argon mixture, and a methane-Xe-argon mixture at the level of 1% methane and O(100 ppm) Xenon concentration. A light detection system will be designed that is sensitive to both the 128 nm scintillation light from argon using existing VUV SiPMs and the ~170 nm scintillation light from xenon using an existing photomultiplier tube. The methane will be introduced using nonflammable P-10 (90% Ar, 10% CH4) gas after designing an injection system.

Advances silicon timing sensors for future trackers
This proposal seeks to measure the spatial resolution and timing performance of existing trench-isolated and AC-LGAD sensors using the Fermilab Test Beam Facility and the timing lab at SiDet. As an outcome of this effort, we will refine the sensor and electronics designs, targeting the first demonstration of a multi-layer tracking telescope achieving the spatial and time resolutions requirements for trackers at future colliders. Measurements of prototype sensors as well as the multi-channel tracker system will require the development of dedicated readout electronics and data acquisition. Due to the unique signal sharing characteristics of AC-LGADs, simultaneous readout of multiple channels is required. The readout of our prototype detector will be performed through a new generation of fast, low-noise 25-channel readout boards to enable precision time resolution measurements 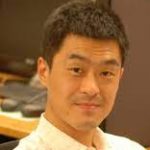 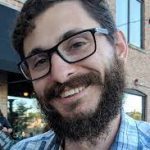 Design and Implementation of Source Calibration System for LArTPCs
The goal of this work is to make the first measurements of the ionization-only and ionization-plus-scintillation energy resolution of a pixelated LArTPC at low energies. Our goal is to make these measurements with two pixel-based readout systems (LArPix and QPix) in order to inform the design of future pixel readout chips. We would measure the behavior of the energy resolution in the 1 MeV to 8 MeV range. These would be the first published measurements of energy resolution at low energy for pixelated readouts and would enable a deeper understanding of the physics enabled by a fully pixelated DUNE Far Detector module.

The Excellence in Detector and Instrumentation Technologies (EDIT) symposium is for graduate students or first year postdocs to get hands-on experience with detector technology.